The King Slime is the boss version of the Blue Slime, having 100 HP (equivalent to 50 hearts). It has a small chance of spawning instead of a normal Blue Slime both on slime islands and across the overworld. It summons in Blue Slimes to fight you and hops towards you malevolently. When defeated, it drops a tool that appears to be made entirely from Blue Slime material, named "King Slime (Tool Name)" which has a mining speed of 8 and a durability of 1500. It also has 3 modifier slots and a Mining Level of Manyullyn. It will also always drop a Miniature Yellow Heart (It used to drop a Miniature Red Heart instead) and 3 Gelatinous Slime. 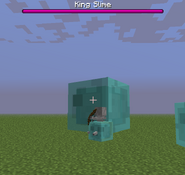 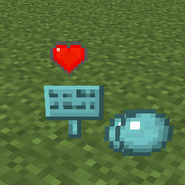 An older image of the drops of the King Slime. A red heart, 3 slimeballs, and a battlesign. The slime may drop many other types of tools as well

The King Slime is a reference to the game Terraria, another action fighting sandbox game.