Miniture Red Hearts have been in many versions, with Yellow and Green added in the 1.5.4 update. 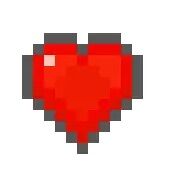 The Hearts are used to craft the different levels of Heart Canisters. Yellow hearts can also be crafted down to red.

They can be eaten to restore health as of 1.5.4. The red hearts will restore 10 hearts, the yellow 20 hearts, and the green 30 hearts.